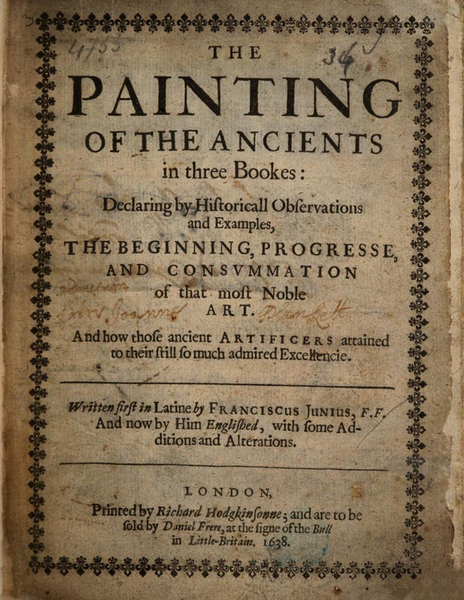 Franciscus Junius, alias François du Jon (Heidelberg 1591 – Oxford 1677), was a philologist with a strong interest in the history of art. Born as the son of a Hebrew professor at Leiden University, Junius was part of to the international Republic of Letters. He grew up in Dordrecht under the guidance of his brother-in-law, the important scholar Gerardus Vossius, and studied theology in Leiden and Middelburg. In 1620, he found a patron in Thomas Howard, Earl of Arundel, and become employed as the tutor of the Earl’s son and librarian. In 1642 he returned to the Dutch Republic in the company of his patron. Besides his De pictura veterum, Junius published several books related to language and religion. Two years after his return to England, he died in 1677 in Oxford in the house of his nephew Isaac Vossius.

In 1637, Junius wrote De pictura veterum (in Latin) for the Earl of Arundel, who was a prominent collector of antique art.[1] The second edition, The painting of the Ancients (in English), was published in 1638 and dedicated to the earl’s wife Alethea Howard. Developing a strong interest in the development of the Dutch language, Junius published his treatise in Dutch in 1641 (Schilder-konst der Oude), re-editing and enlarging the text considerably (see various comments throughout the analysis in this database). New editions were published in all three languages, amongst them a Dutch edition published by Willem Goeree in 1675 (that is, after Goeree had started publishing his own treatises on art). The German translation of 1770 made use of the original Latin edition of 1637.

De Schilderkonst der Oude is divided into three books, each with different chapters which in turn are divided into paragraphs. In his treatise, which is theoretical in nature, Junius describes the art of painting, by means of citations from the work of a wide range of ancient Greek and Roman, and medieval (Latin) authors. In the Latin edition, he comments very concisely on the citations (while including original Greek citations), whereas he increasingly formulates his interpretation of the ancient texts more freely in the English and Dutch editions (in which the citations are translated into the respective languages). In the first book, he attempts to define what painting is, focusing primarily on the notions of imitation and imagination (Cap. I-III); the relation between Poetry and Painting (esp. Cap. IV); the necessity of practice and diligence and the role of patronage (Cap. V). In the second book, Junius gives an explanation for the existence of art (Cap.I); he describes the importance of instruction and inclination (Cap. II-III); offers a list of sources on artists (Cap. III); argues for competition and emulation to make progress (Cap. IV-V); warns for the loss of simplicity (‘eenvoudigheyd’) (Cap. VI); attempts to define positive characteristics for an art work (Cap. VII) and how to reach perfection (Cap. VIII); devotes considerable space to the different uses and functions (‘ghebruyck’) of different types of visual arts through time (Cap. VIII); reflects on reputation and appreciation (in the form of both honour and monetary rewards) and the role of patrons therein (Cap. IX-X); on artistic liberty, innovation and creativity (Cap. X); as well as success (‘gheluckighe uytkomste’) and what it takes to become a great and universal master (Cap. XI); he discusses judgement of art, both for the artist and the connoisseur (Cap. XII); the flourishing of art (XIII); he finishes the book by referring to differences in success (‘fortuyne’) between artists (Cap. IV). In the third and final book of De Schilder-konst der Oude, Junius elaborates on different elements of a painting. Therefore, this book – although essentially theoretical in nature – is more directly related to artistic practice. Junius subsequently discusses (providing ample references): the subject and history, or invention and the necessity of knowledge of these subjects and the ability to depict them truthfully and in a stately and decorous manner (Cap. I); proportion and harmony (Cap. II); colour, light and shadow (Cap. III); movement and the depiction of emotions (Cap. IV); composition (Cap. V). In chapter VI, Junius argues that all the previously discussed elements in a painting should be in harmony, which will lead to a beautiful whole. In chapter VII he returns to the question of judgement and provides advice to connoisseurs, with an excursus to the theme of copies.

Our choice to work from the Dutch edition of 1641 as a basis for the analysis in the database is based on the following reasons: Firstly, the Dutch text is the most elaborate of the three first editions, both in regard to Junius’ commentary on the citations from ancient authors and for the introduction and explanation of concepts. Secondly, for the Dutch edition, Junius clearly attempted to develop a Dutch language of art. He frequently lists several alternatives (synonyms and near-synonyms) for a term in order to clarify what he means, where the Latin and English text only offer one term. Junius’ Dutch translations of the Latin and English terminology are frequently not necessarily translations in the strictest sense, but rather approximate reflections of the terms Junius chose in the earlier Latin and English to describe a certain notion or concept. Oftentimes Junius had provided a description in the Latin or English edition, rather than a precise term (this is mentioned in the comments to the different citations). From the discrepancies between the Latin and English edition and the Dutch edition, especially in Book Three, it is clear that Junius reworked large parts of the text, mainly by adding explanations and clarifications to the citations. Since Junius (or someone close to him?) himself worked on the translation of the text, he took the effort to reformulate the text of the earlier edition. From this perspective, De Pictura Veterum differs from other texts in this database, where the translations were generally done at a later date and/or by someone unrelated to the original author. In fact, it is quite probable that the Latin edition of 1694 was based on the changes that Junius had made in the different English (1638) and Dutch editions (1641, 1659 and 1675).

N.B. The translation of the selected citations was done by Marije Osnabrugge. Please note that it is only a suggested translation, produced for the convenience of the database user and that it should by no means be considered a definite scientific translation. We have tried to stay as close to the wording in the Dutch text as possible, to convey Junius’ choice of words.

[1] For an appreciation of the different editions and the impact of the book(s), see in particular WESTSTEIJN, 2015 (esp. Chapter Two for a reflection on Junius' three first editions and the translation process and the Appendix for the major differences between the first Latin and English editions).
in-4 english